Medical experts and health care companies around the world recognize the value of developing ways to diagnose infectious diseases noninvasively at the point of care (POC), particularly in developing countries and rural areas where medical screening can be nonexistent. Many believe that readily available optical componentry that can be scaled up for volume production provides the best route to success.“I’ve worked on optical spectroscopy-based noninvasive diagnostics for over 20 years, and application of my experience in this arena to infectious diseases was an opportunity that presented itself in 2014,” said John Maynard, vice president of product management at Avisa Pharma. “I was intrigued by the potential of a rapid, noninvasive, POC test to improve detection of lung infections and to better target antibiotics to treat these infections.”

“I was intrigued by the potential of a rapid, noninvasive, point-of-care test to improve detection of lung infections and to better target antibiotics to treat these infections.”  –John Maynard, Avisa Pharma

Lung infections such as pneumonia are particularly deadly among the very young, very old, and patients with compromised immune systems. According to the World Health Organization (WHO), pneumonia kills 1.8 million children under the age of 5 every year. It kills more children than any other illness, in every region of the world. In spite of its huge toll, relatively few global resources are dedicated to tackling this killer.

Currently, the gold standard for detecting the cause of a pneumonia infection is to culture a sputum sample and see what grows. This process is highly dependent on getting a good sample that specifically comes from the part of the lung with the infection. But transporting and preparing the sputum for culture without contamination is challenging. And 24 to 72 hours are required to grow the cultures before a pathologist can determine the causative pathogens.

“The long time to an answer means doctors must treat patients empirically because they don’t know the cause of the infection,” Maynard said. “In contrast, the Avisa breath test for certain virulent urease respiratory pathogens measures the entire lung and does not require sputum, delivering a result in 10 minutes.”

The test works by detecting labeled CO2 emitted by bacteria that metabolize in urea in the breath of patients. First, a patient provides a baseline breath sample to establish their natural ratio of 13CO2 (the label) to 12CO2. Then, a nebulized mist of 13C urea is delivered to the lungs. In normal health, a person exhales around 20 times more 12CO2 than 13CO2, but if the patient’s lungs are infected with virulent bacteria that metabolize in urea, there will be relatively more 13CO2.

Measuring the difference in the ratio of 13CO2 to 12CO2 in the baseline and postnebulized samples can determine if a lung infection is caused by urease, avirulence factor found in several pathogenic bacteria. The Avisa instrument uses an NIR vertical-cavity surface-emitting laser (VCSEL) that is scanned over the 13CO2 and 12CO2 absorption peaks using wavelength modulation spectroscopy. From this, the difference in the ratios, known as the delta over baseline, can be determined. The entire procedure takes less than 10 minutes and provides the doctor with immediate information as to whether the pneumonia is caused by a virulent urease pathogen to allow better informed decisions on antibiotic use and choice. 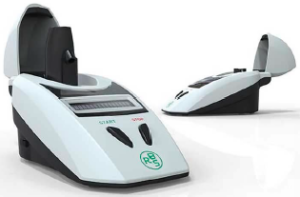 This laser-based breathalyzer comprises a single-use disposable cough sample collection tube and a bio-optical sensor with a patented biochemical coating formulated to react with the TB bacilli. Courtesy of Rapid Biosensor Systems.

“Urease pathogens tend to be more virulent than the more common Streptococcus bacteria that cause pneumonia and require powerful, broad-spectrum antibiotics for effective treatment,” Maynard said. “Today, most doctors use empiric therapy to prescribe antibiotics for pneumonia, resulting in overuse that can lead to unnecessary hospitalizations, increasing antimicrobial resistance, and changes to the patient’s gut microbiome that can have longer-term health implications, including secondary C. difficile infection and metabolic changes.” Despite long regulatory review processes associated with any medical technology, Maynard said that several cost-effective optical-based devices that diagnose disease noninvasively could come to market in the next five years. Tuberculosis breathalyzer One such example is for detecting tuberculosis (TB). U.K.-based Rapid Biosensor Systems Ltd. has developed a laser-based breathalyzer that detects a specific antigen — as opposed to a byproduct of the disease. This specificity, the company says, is over 95 percent accurate and could help to contain the spread of the disease, which many thought was in decline. 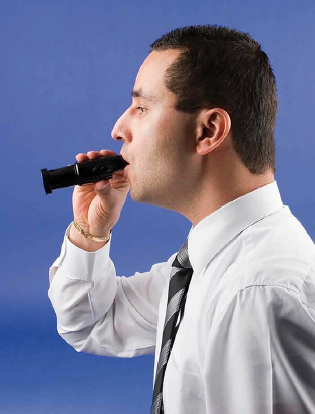 Tuberculosis is one of the world’s most serious public health problems, killing more adults than any other single infectious disease. U.K.-based Rapid Biosensor Systems has developed a laser-based breathalyzer that detects a specific antigen in a bid to contain the growing prevalence of this “old” disease. Courtesy of Rapid Biosensor Systems.

According to the WHO, previously common diseases such as TB have recently re-emerged, driven by various social factors, and pose a significant threat to world health. TB is spread through the air by an infected cough, sneeze, or spit. There are 8.8 million active cases diagnosed each year, and almost 2 million of those infected die. Despite effective drugs against TB, it remains one of the world’s most serious public health problems, killing more adults than any other single infectious disease.

The problem has been made worse because new strains of multidrug-resistant TB have added further pressure on health care systems. “There was, and still is, an unmet medical need for a very fast, low-cost, noninvasive test to detect active TB at the POC,” said Dennis Camilleri, CEO of Rapid Biosensor Systems. “The WHO had predicted this need because if TB can be screened quickly, while people wait two minutes for a result, then the positives can be treated sooner, thus minimizing the spread of this killer disease and ultimately reducing health costs.”

‘The emerging market economies need low-cost medical tests for infectious diseases if they are to reduce mortality, but there must be a willingness from governments to implement medical screening at the point of care.’—Dennis Camilleri, Rapid Biosensor Systems Ltd.

The Breath Analyser unit from Rapid Biosensor Systems comprises a single-use disposable cough collection tube in which the sample is made up of the ?ne liquid droplets produced by coughing. After being nebulized using a 0.9 percent saline solution, the patient coughs into the collection tube. At the bottom of it is a bio-optical sensor with a biochemical coating formulated to react with the TB bacilli. A push-and-twist action seals the aerosol sample in the tube, causing the droplets to collect on the biosensor. 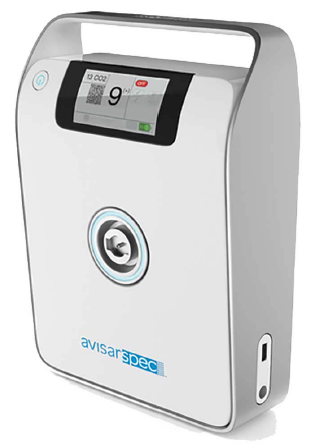 Avisar laser spectrometer for measurement of 13CO2 to 12CO2 ratio in exhaled breath collected with the AvisarLink, which is currently in clinical trials. Courtesy of Avisa Pharma.

“With breath-based antigen tests, the actual infection antigen/bacilli in a cough sample is being detected and not a byproduct of TB,” Camilleri said. “In our case, we use [an] evanescent wave optical sensor with a proprietary biocoating that detects the change in optical fluorescence signal caused by the presence of the TB bacilli.” With its portable, easy-to-use, disposable, and speedy TB Breathalyser, Rapid Biosensor Systems hopes that uptake in developing countries, in particular, will help to contain further spread of the disease. As ever, cost is the biggest challenge. But it’s one that Camilleri hopes will be surmountable should sufficient investment be made available to scale up production. 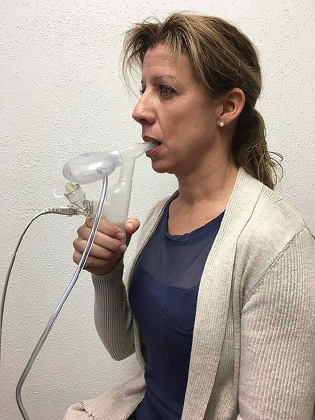 Pneumonia patient breathing through AvisarLink nebulizer and breath collection kit. The AV-U13 drug is delivered to the lungs as a nebulized mist using the Aerogen Solo mesh nebulizer mated to the Aerogen Ultra adapter. Exhaled breath is sampled from the chamber attached to the Ultra adapter at the baseline and postnebulization. Courtesy of Avisa Pharma.

“The emerging market economies need low-cost medical tests for infectious diseases if they are to reduce mortality, but there must be a willingness from governments to implement medical screening at the POC,” he said. “Optical/photonics is a volume business: The higher the volume, the lower the cost of materials, which will meet the cost targets proposed by the WHO for tests of this kind.” Gastrointestinal diseases Infectious diseases within the gastrointestinal tract are notoriously tricky to diagnose, as they are often associated with nonspecific symptoms, such as obscure gastrointestinal bleeding, diarrhea, and bloating. Because of its length and position in the digestive system, the small intestine can be very challenging to reach and visualize, often requiring an invasive procedure during which the patient needs to be sedated. But a new device with four minicameras that can be swallowed by the patient could offer a much less invasive alternative. The CapsoCam Plus capsule endoscope from California-based medical device innovator CapsoVision provides a comprehensive 360° view of the patient’s digestive tract without the need for the patient to be sedated. The procedure itself is pain-free.

“Patients don’t have to wear bulky external equipment during the examination, and they don’t have to return to the physician’s office once the examination is complete,” said Elina Jaime, product manager at CapsoVision. “The procedure is completely wire-free, which also saves time for the staff and eliminates scheduling bottlenecks while reducing valuable exam room time.” The capsule is approximately the size of a vitamin pill and can be swallowed with a few sips of water. With four lateral, onboard cameras that capture high-resolution, 360° images, CapsoCam Plus provides a detailed examination of the mucosal surface, including a look at areas behind mucosal folds. “Through advances in optics, we are able to place four high-resolution cameras around the circumference of the capsule to capture a full 360-degree view of the gastrointestinal tract,” Jaime said. “These cameras capture high-resolution images at a maximum frame rate of 20 fps — 5 fps per camera.” 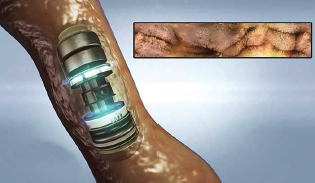 Through advanced optical technology, CapsoCam Plus captures a full 360° view of the gastrointestinal tract, providing physicians with more detailed imaging and a larger vertical field of view. Courtesy of CapsoVision.